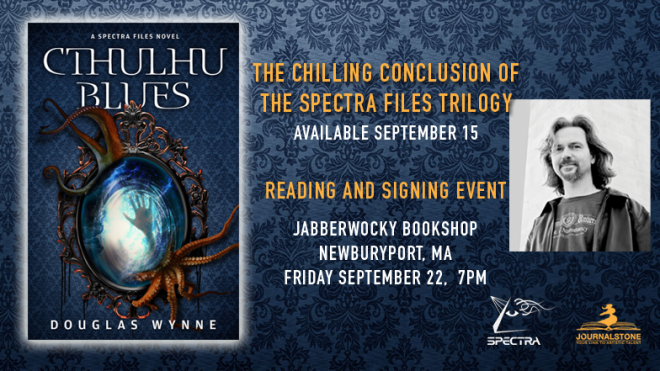 Cthulhu Blues was released on Friday, completing the SPECTRA Files trilogy. It’s a little bittersweet to be wrapping up Becca’s story, but she deserves some rest after all she’s been through. I haven’t ruled out the possibility of writing other stories related to SPECTRA and the Philips family secrets, but if I do revisit that world, it will likely be in short form, maybe a prequel novella. Meanwhile, I’m looking forward to some non-Lovecraftian projects that I have brewing for 2018.

This week, you can find my thoughts on the trilogy in a bunch of different places. I have an essay up at John Scalzi’s blog about the Big Idea behind the series and another about the Scariest Part at Nicholas Kaufman’s blog. You can also read the first chapter of Cthulhu Blues at Tor.com.

On Sunday, I chatted with the Lovecraft eZine about the book and then enjoyed a rambling conversation with those guys about Stephen King film adaptations. You can check that out on YouTube here. And on Wednesday  night, I’ll be doing another podcast with Legends of Tabletop, whom I had the pleasure of meeting at NecronomiCon last month.

I’ll be reading and signing at Jabberwocky Bookshop in Newburyport, MA, on Friday, September 22nd at 7 PM. The following morning, Saturday, I’m teaching a sold out horror writing workshop with my buddy Bracken MacLeod at the Peabody Essex Museum as part of the festival day for It’s Alive! the Kirk Hammett Horror and Sci-Fi movie poster exhibit. Should be fun. And next week, New Hampshire folks can catch me reading and signing at Water Street Books in Exeter on Thursday, September 28th, also at 7 PM.

Man, I think I need a nap after just looking at that itinerary!

When the dust settles, I’ll be joining an epic roster of horror writers at the third annual Merrimack Valley Halloween Book Festival in Haverhill where I’m signing all day and moderating a panel on northern New England horror. That’s on Saturday, October 21st. If you’re a New England fan of my man Joe Hill, you don’t want to miss that one. Joe will be joining us for a live interview with Christopher Golden and offering an early release of his new book, Strange Weather.

I guess that’s all for now. Hope to see you out there this Halloween season!